Wood boring insects are most certainly a concern causing significant damage to your timbers before you can even notice them. There are many types of wood boring insects; below, you will find more information on some of the most common insects: 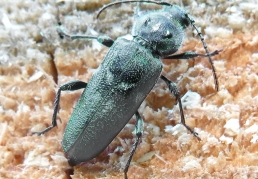 The House Longhorn Beetle is a large black or brown coloured beetle between 12 to 15mm long and are covered in greyish hair. The larvae mature in the spring. Having an appetite for softwood, these beetles can cause major damage in the main to roof timbers. The larvae burrow their way through the timbers and leave holes of up to 10mm diameter. Frass is the common name for the bore dust they leave behind. Adults emerge during the months of July to September in order to mate and have an approximate life cycle of 4 years. The House Longhorn Beetle lay their eggs in a fan shaped pattern within cracks in the wood and lay up to 200 eggs which are white spindle shaped.

Treatment for House Longhorn Beetle is more complicated as it normally means complete replacement of the infested timber as they are usually beyond repair. 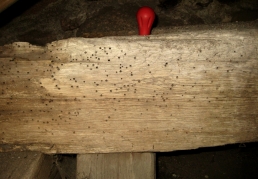 The Death Watch Beetle (Xestobium Rufovillosum) is an indigenous British Insect that infects large hardwood timbers such as oak, ash and also horse chestnut. This Beetle is also attracted to timbers which have suffered some kind of fungal decay such as Wet Rot (Coniophora Puteana).

The Death Watch Beetle can be quite hard to both detect and treat as the larvae can live in the timber for up to 13 years boring holes of 2 to 3mm in the timbers. 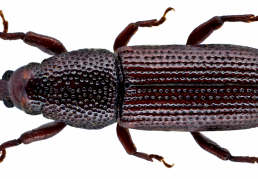 Wood Boring Weevils can be found in hardwoods, plywoods and softwoods all of which have had past or current fungal activity. The flight holes are generally irregularly oval to slit-shaped with jagged edges. Tunnels formed by the larvae and adults are circular about 1/16” in diameter generally straight and run along the grain of the wood near to the surface. The Wood Boring Weevils feed on damp and decaying wood but will also continue to eat dry wood that has previously been attacked by fungus.

The female lays eggs just below the surface of the wood in either existing cracks or in the flight holes. The eggs take approximately 16 days to hatch and the lava pupates in 6 to 8 months after hatching. The pupal stage lasts for 16 days and usually occurs between the months of June and October. The adult will continue to tunnel throughout its lifetime. The Wood Boring Weevil will not normally colonize dry wood.

If you eradicate the fungal growth and reduce moisture levels within the infected timbers then the infestation will die off. Insecticides can also be used to kill the weevil. 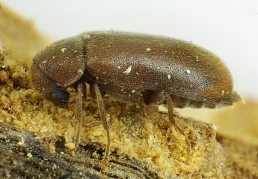 The Bark Sap Beetle (Ernobius Mollis) only attacks soft woods when the bark is present. It can often be mistaken for the Common Furniture Beetle (Anobium Punctatum). Flight holes are rarely found further than 15mm from barked area. The holes are normally around 2mm in diameter. The bore dust is gritty to feel and small bun-shaped light and dark coloured pellets.

The adult Bark Sap Beetle emerges during the months of May to August to lay eggs in the bark and these eggs are white lemon shaped. The Larvae bores and grows first in the bark and may superficially attack the outer sapwood.

As damage caused by this beetle is insignificant, no specialist chemical treatment is necessary. 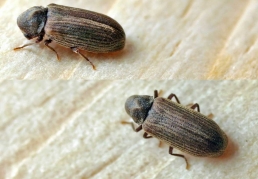 This is the most common of the woodworm beetles. Despite its name it is just as likely to attack building timbers as it is to attack furniture. The Common Furniture Beetles leaves small round holes approximately 1.5 to 2mm diameter and the bore-dust under a microscope shows up as lemon shaped pellets that are slightly gritty to touch. The adult beetle is between 3 to 5mm long and it looks like it has a monks type hood over its head.

Each female Common Furniture Beetle on average lays between 20 to 60 eggs which are layed in cracks of unpolished wood or within the flight holes. Within 2 to 3 weeks the larva hatch and immediate start to tunnel through the timber. The Larval stage can last from between 3 and 4 years and is spent entirely in the wood. The larvae are greyish white in colour with a narrow but dark band over their mouth. 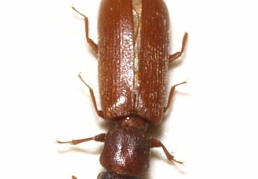 The Lyctus Powder Post Beetle is a reddish/brown colour in appearance and are up to 7mm in length. Infested timber can be reduced to fine powder that crumble at touch which is why this beetle has the name Powder Post Beetle. The female can lay up to a maximum of 200 eggs and these are pushed into large vessels in the exposed end grain. Once the larvae hatch they feed on the sapwood for approximately 1 to 2 years. Adult Lyctus Powder Post Beetles emerge from the timber during the months of May to September.

Due to the damage caused by the Lyctus Powder Post Beetle following an infestation the treatment is likely to be timber replacement.

In some cases, the damage sustained by wood boring insects can be too far gone to repair and would need complete removal. Having said that, we can offer various specialist paste and gel treatments in order to remove the insects. All of this would be determined by our expert surveyors during the initial survey.

Our timber decay treatment knowledge does not stop at the species of wood boring insects. We can also help treat wet rot fungus as well as dry rot fungus to preserve your timbers. We can also rid of any woodworm problems that you need tackling.

If you suspect that you have wood boring insect problems in your property (whether that be in Guildford, Surrey or London), call us on 01372 844534 or 01372 849975 and let us identify which wood boring insect infestation is occurring. You can also fill out our online enquiry form. Alternatively, you can email us at [email protected] and we will reply as soon as we can.

For more information about all our Building Services,
please call us on 01372 844534 or alternatively, Request a free call back, Request a Quote, Request a Survey